The 2021 Edition of the Movie Business is getting closer and closer.… reset statistics in MovieStats. Before that happens, however, I wanted to analyze your films from different angles. 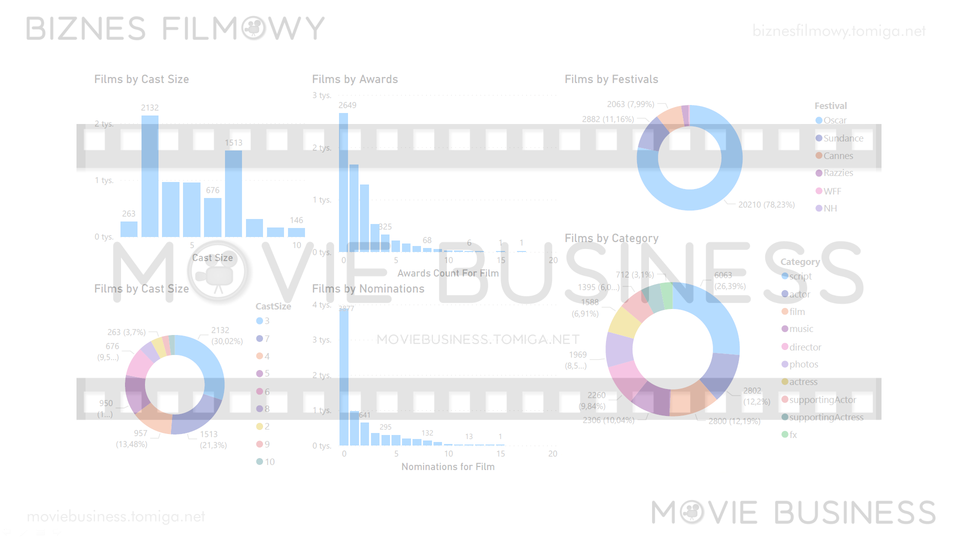 For the record MovieStats is a service with player statistics and Box Office created based on players' movies. Due to the limited space on the server, however, not all film from a given game go there. These are only production from challenge mode, party game mode and Career. The export of films takes place only after the end of the game, but it does not occur for games the player used cheat codes (Donors have the ability to use cheat codes in the party game). Of course, the player must have an MovieStats account and have the export option enabled.

Due to limited server space, not all player films are exported. They are selected only from:

For example, if the same film has the largest audience and the highest profit, the second criterion selected is the next film with the second highest score.

So let's take a look at the various statistics of films created by players in the 2020 Edition.

More than 7,100 movies have been exported to MovieStats, the vast majority of which are from party game (3,561), second from career mode (2,675) and least from challenge mode. The most films received 4 stars (this is more than 33.5%). Second in the order are 3* films (30.2%) followed by 5* (almost 28.5%). Of course, remember that to MovieStats mostly exported are the best productions and those… the worst (which won the Golden Raspberries). So it's hard to draw general conclusions here for the entire population of player-made movies.

As for genres, there are no surprises here. The more difficult the genre (later unlocked), the fewer movies of this type go to MovieStats.

However, the best results may be interesting, which at first glance seem almost improbable (but all indications are that they were achieved in the most honest way possible). The highest rate of return is 2060%. The biggest profit is over 1.3 billion! On the other hand, the most expensive film produced by the player cost over 1.6 billion (including advertising). As you probably guessed, he couldn't return of cost. The most awards won by one film was 17. And the most raspberries were 5.

Interestingly, the median profit from movies in MovieStats is over 41 million, where the median cost is only 19 million.

Here we can take a look at how the films performed at festivals. And so, most films did not win any awards. And the ones they won were most often the Oscars (for sure it is due to the fact that at this festival there are the most categories where prizes are awarded). As for the category, the Oscars for the best screenplay reign supreme here – it is simply the simplest reward for a player to win. The award for the best movie is only the third category in which players receive awards.

Regarding the average statistics, here we have one more interesting median regarding the rate of return and it is 168%.

It is worth looking at the inconspicuous tables. It turns out that the most films in MovieStats are ambitious productions, while the fewest are representatives of artistic cinema (which was to be expected). There are no surprises further. Scenario level from A-Z as expected, as well as scenario ending (happy end, tragic, normal, ambiguous). About age categories you hit it somewhere in PG-13 – as the vast majority of films come from the 12+ and 15+ categories.

The statistics regarding the number of casts are also interesting. Well, most movies in MovieStats are movies with 3 creators (director + two actors). On the next position out of 7 (so I guess it is, in addition to the director, 4 actors, as well as a composer and cinematographer). There are the fewest films with the largest cast (10 and 9 creators) – which was a little surprise for me).

Now a few charts that show the relationship between various movie parameters and its profit, total cost (movie cost + advertisement) and advertising. 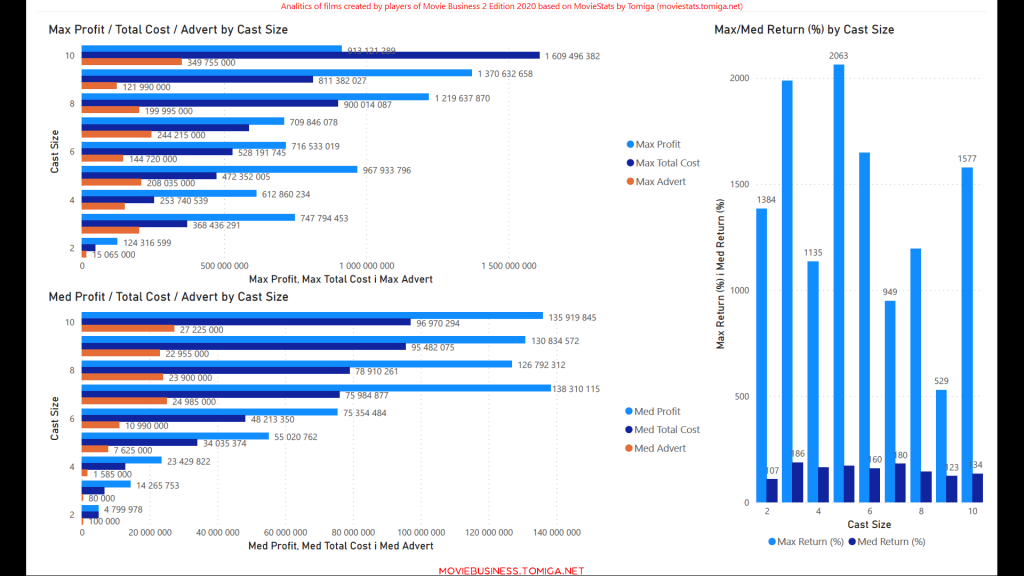 I'll start with the most interesting number of cast. This is the most difficult element to balance but as you can see the game is doing extremely well with it. As expected, both the biggest costs and the biggest profits will be obtained for films with the largest cast. But when you look at the median rate of return, it's relatively flat regardless of the size of the cast.The hardest thing is to return cost of the film with the director and only one actor (which is intentional). Also, the film with the largest (10 and 9-person cast) pay the percentage the least, but remember that these are the most expensive films in this regard, in measurable values these are really large amounts. With a median cost of 96 million, the median profit is more than 135 million. That's nearly 40 million pure profit from a single film.

Profit, cost and advertising by rating 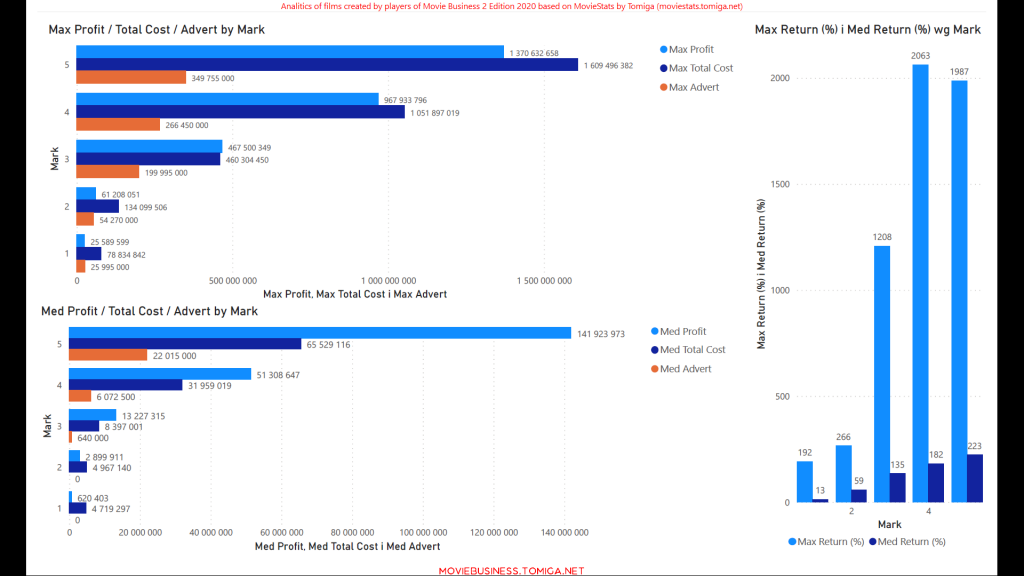 Now let's take a look at the cost, profit and advertising issues depending on the rating the movie receives. There are no surprises here (which is good). The better the rating of the movie, the more you have to spend on it, but you can also expect higher returns (both in nominal terms and in percentage).

Profit, cost and advertising by genre 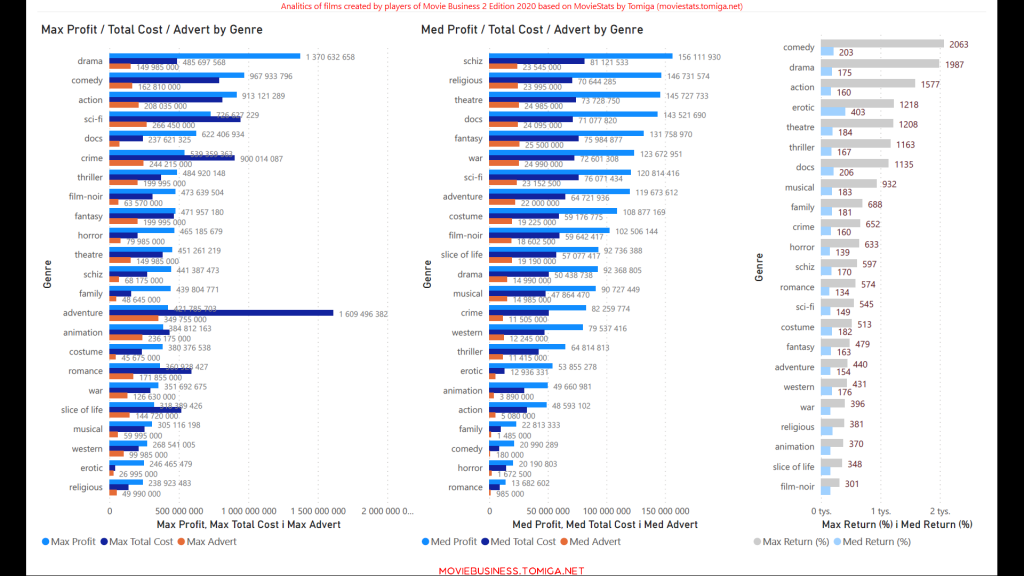 Another interesting analysis concerns the impact of the genre on profits, costs and advertising budget. And here it is also interesting. It is obvious that some genres sell better than others and the game does not try to average the results here. Nevertheless, the spread between the median rate of return is also relatively small. You can make money on each genre (also lost, as shown by the most expensive adventure film. The highest median of the rate of return is from… easy to predict… films for adults (403%) next big surprises because of documents (206%) (looking at the budgets that players spend on this genre, it is hardly surprising, then we have comedies (203%) and another surprise is the theater (184%) (probably why all actors want their theaters.) I guesses that these unpopular genres pay off so well mainly thanks to awards won at festivals.

And here it is worth considering the specifics of statistics for a moment. If you are wondering about the fact of the high median profits for less popular genres (schiz, religious and theater), these are the last genres that the player unlocks. Hence, he must already have a lot of cash by then and hence there are probably high budgets for the production of these films (the exception here are religious films… well, but maybe here we are dealing with the case of Father Director – a joke for Polish players).

It is also worth returning to the first slide where you will find the number of such films in the database. There are relatively the fewest of them (with over 1,800 comedy films, there are only 15 schiz) – So they had to be outstanding productions. Hence, one cannot draw too hasty conclusions from such analyzes in isolation from other parameters. Yes “lie, big lie and statistics” is not just a catchy saying. 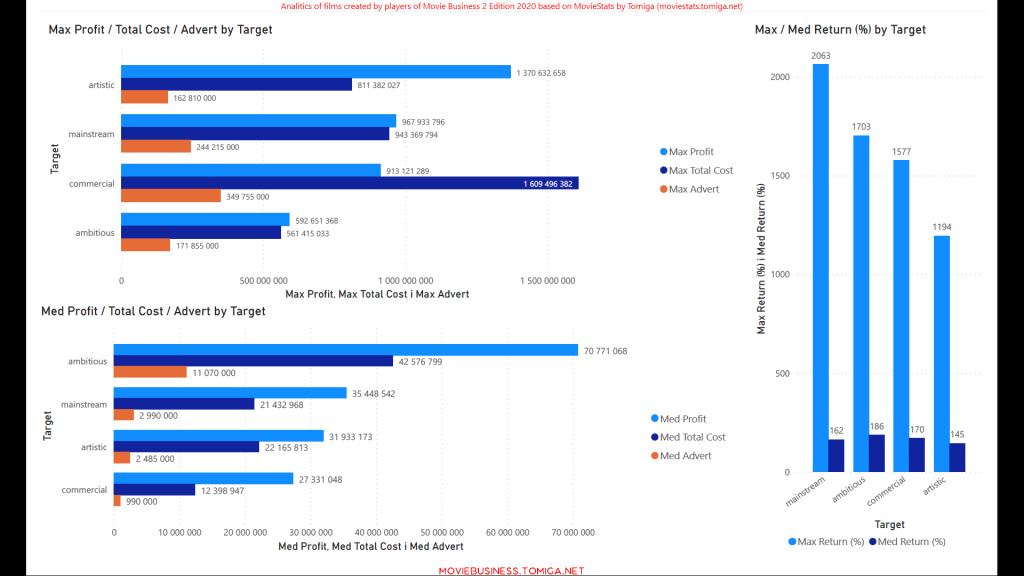 Let's look at how the target audience influences the basic parameters of the films.

The median rate of return of films, regardless of the target, is very similar. And according to the assumptions, the most difficult thing is to obtain a high profit from artistic productions. Interestingly, the most you can earn on ambitious films (even more than on purely commercial productions). But here, it is for sure due to the fact that commercial productions cannot apply for awards at festivals. On the other hand, good, ambitious productions have a better chance of winning festival laurels. 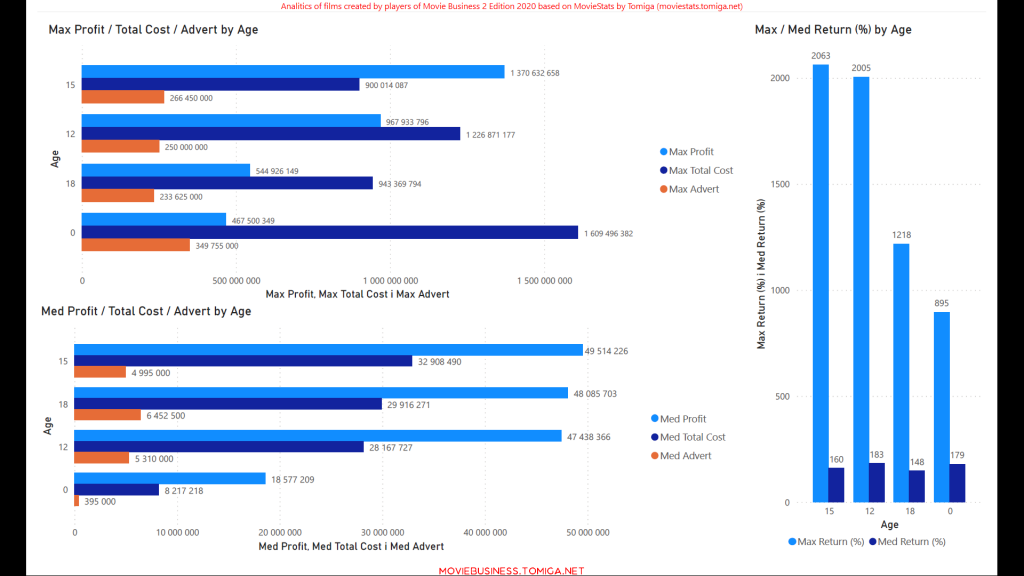 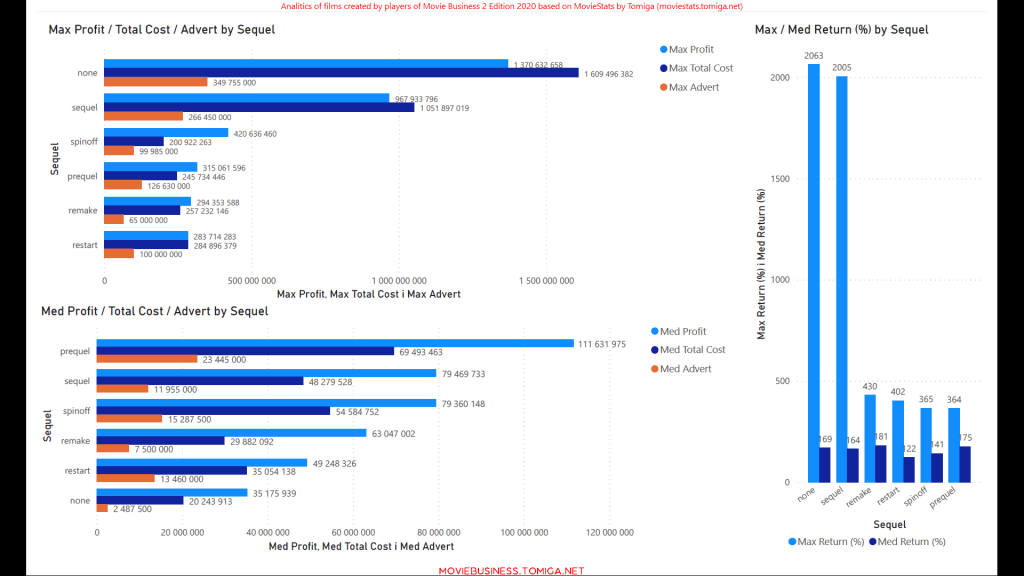 Now let's see how they are different continuation type. And here's a curiosity. On average (median) you invest the most in prequels, and only then in sequels and spin-offs. In terms of rates of return, most types of production are very close to each other here. The median rate of return is the most favorable in the case of remaks. On the other hand, restarts are noticeably the worst.

Films in a nutshell 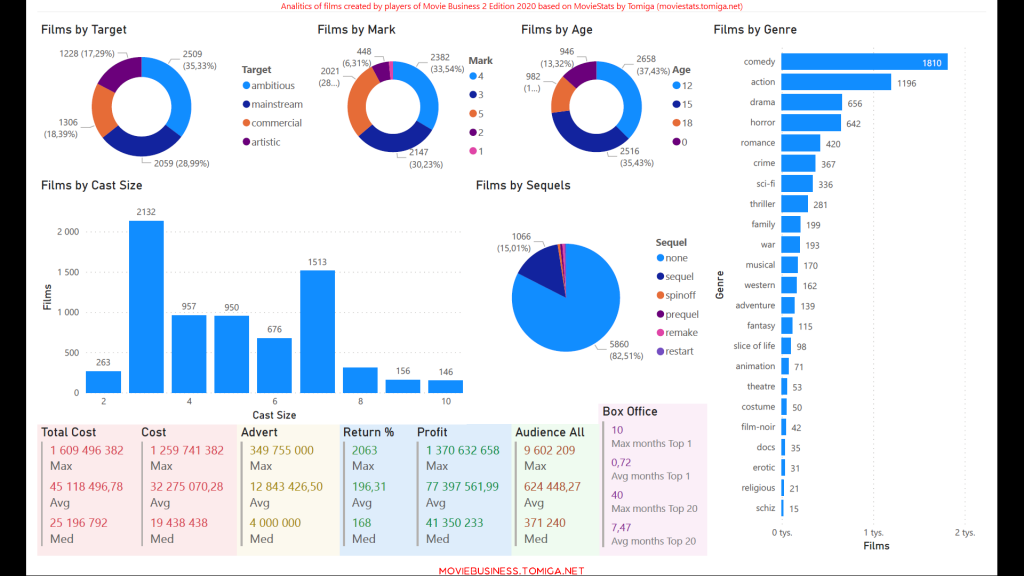 It's time for the last, summarizing analysis. Where the maximum values, median and average of such values as total cost (with advertising), cost of production (without advertising), advertising costs, return, profit, as well as the audience of the video (note: values in thousands) and statistics from the local Box Office (which show that the longest video stayed 10 months at the top of the Box Office) were collected again.

I admit that the main purpose of analyzing the players' films was to check how the algorithms were doing in the game, depending on various criteria under which the films are analyzed. In particular, how does genre and cast size affect the ratings / profits / rewards earned by films, because I must admit that the most difficult part of the game (and taking the most time) is the right balance of the game. And I am positively surprised by the results. Which does not mean that in the 2021 edition there will be some changes in this aspect (although now I am afraid if they were really needed. Well, we will probably see in a year when there will be an opportunity to make a comparison.

As you can see, although the Movie Business at first glance may seem like a relatively simple game, the mechanics underneath is not that trivial and there are many criteria that must be taken into account in order for your film to ultimately be successful. Therefore, although the game to many players may seem a bit random at the beginning… but as statistics show, strategies can be developed to lead to success. Not in every movie… but after all, the Movie Business is not math, but art… success is never guaranteed in this area.

If you want to be interested in any other statistics available in MovieStats, let me know before the reset.