Here are some frequently asked questions about Movie Business.

Why, despite the registration in MovieStats my movies are not exported at the end of the game?

First of all, for the profile to be exported, you must have an account on MovieStats. If you have an account there and it is active, your profile and films should be exported automatically after the end of the game (if you played mode that allows Data Export).

Is it possible to produce several movies at the same time?

Are the titles of movies affect profit / evaluation of the film?

No, film titles only affect the well-being of players.

When you create a script, you cannot select the each of the available genres. There is no for example. sci-fi. If this is a bug in the game?

No, this is not a mistake. At the beginning of the game you can write scripts for only a few basic genres, the rest you have to work for by gaining experience (by producing good films, winning festivals, etc.). The exception is the mode Quick game where you have instant access to all genres available in the game. In addition, at the Amateur level, you have access to only basic species. Donors received access to all genres also in the party game.

I add my film to a festival and when it comes time to give away awards, my film is not even in the nominations at all?

Apparently the film was too weak to get a nomination. The fact that you're reporting the film to the Festival does not mean that right away you get nomination. To each of the festival, you can report any movie (even with a rating of one star *). In addition, various festivals has different criteria for the awards (that is the reason the few of them exists in the game) to promote various types of films.

Could you add festival X?

All the festivals are generally there. I see no reason make additional one, because it does not make big impact on the game. However, could lead to a situation when one film takes most of the prizes, or on the contrary, virtually every film gets a prize. Awards would lose its uniqueness.

How to add new artists?

You can submit your own proposals of artists using service MovieStats.

Will there be an option releasing movies on DVD?

At this time, every movie coming to cinemas has its version of DVD/Blu-Ray. And this is the norm. So the profit that you have from the movie includes profits from the sale of media. I see no need for a separate option.

When will the full version of MB2 come out / the game will be finished?

The short answer: I don't know!

When the next version will be released?

For several years, the game's publishing cycle has been quite stable. Every year there is another edition marked with a year, i.e. Movie Business 2 Edition XXXX. Unless anything unexpected happens, the premiere takes place a few days before the Oscars ceremony. Over the following months, if necessary, there are updates to a given edition. They mainly contain bug fixes, updates to the creator database or other elements in the game and sometimes some small, new features. Work on the next edition begins in late autumn (usually around November).

Why computer player can produce new films despite the lack of cash?

Will there be a new genres?

There are 23 film genres in the game. I don't see the need to add new ones. If you do not see these genres, it means that: you play at the easy level, or you have spent too little time on the game (at higher levels you unlock additional genres by gaining prestige points). Please note that subgenres are also available in the game. You can't choose them, but they are set based on your other choices (basic scenario parameters, number and type of creators).

Are you plan to create MB3?

Even if, someone else would have to write it.

How can I help in the creation of the Movie Business 2?

Even if you can not program you are able to help in the creation of the game. Here are suggestions:

What about the serials?

This is a game Movie Business… not TV Business. Contrary to appearances, they are two different worlds, that govern other rights. At first glance it may seem that it's very related topics, however, the rules and algorithms created in Movie Business differs from TV world. Episodes, licenses, completely different stars (only last known movie stars began to appear in the TV series), another popular and range, peculiarities of production etc… elements specific to the world of television.

What about mobile version

In the near future is not planned. More on this topic can be found in this post…

Will there be a version for MAC?

The short answer: Nie.
Dłuższa odpowiedź: This game is a purely hobby project that I create when I feel like it and some free time. Personally, I have always used the Windows platform. So
1. To write anything on MAC you need to have a MAC. I don't have a MAC and don't buy any Apple device in the future.
2. Even if I had a MAC, which would require rewriting the code for that particular platform that
a) the C# programming language in which Movie Business is written is available on MAC, but it uses the MONO version, which does not fully support all the functions available under Windows – especially the user interface)
b) I wouldn't have time for it (and I probably wouldn't want to devote my free time to it)
3. Even if the Movie Business were ported, it would not be approved in the App Store (which, as far as I know, is the only legal way to distribute software on MAC), as it contains a lot of copyrighted content (such as photos of real actors, real names and trademarks, etc.)

The game is too difficult

No, it is not. I suggest you read the text: Movie Business for Beginners

Could we play the game without years limitations?

Several players have asked about the possibility of playing without year limits. The problem with such “game extensions” is consistency… Unfortunately, the game would not behave according to the initial assumptions.

Lack of time constraints, not only will affect the realism (and specifically its lack: the actors more than 100 years old, at best, work only with creators without photos, because the rest would have long since died), but also influence on creators statistics (part of the parameters change over time, for example: sexappeal and action, steadily diminishing) but also on economic behavior (the game has not been tested for such long periods and simply mechanisms in the game would not work, which may result in totally irrational behavior).

In the end, players would have very large budgets, and this would lead to productions, where each would select the most expensive/the best creators and put plenty of ads which would (in many cases) leads to growing profits, what the player would done with cash. Where's the fun?

Other problems include technical limitations. One of the simpler examples is turning over parameters and/or the state of the accounts to negative values… A brief explanation all the data are stored in memory on a specified number of bytes. When the value exceeds the maximum number allowed for the structure, the counter rewind to negative value. To secure the game on all such possibilities, at this stage of the work, is not an option. (such situations occured in the first part of the game and therefore it was needed to introducte, so criticised by many players, tax amount of 50% of your cash).

These are just examples of the lack of consistency and other issues in the case of an artificial lengthening of game time. So there are no chances for such modification…

Note for donors from version 0.9.0 appeared Game+ that is, the possibility of extending the time of the game with some restrictions.

How can I check whether the actor is in the Movie Business?

Use the search engine on MovieStats under this address. Simply type part of the name (to minimize the possibility of typos).

If you start the game it looks like this… 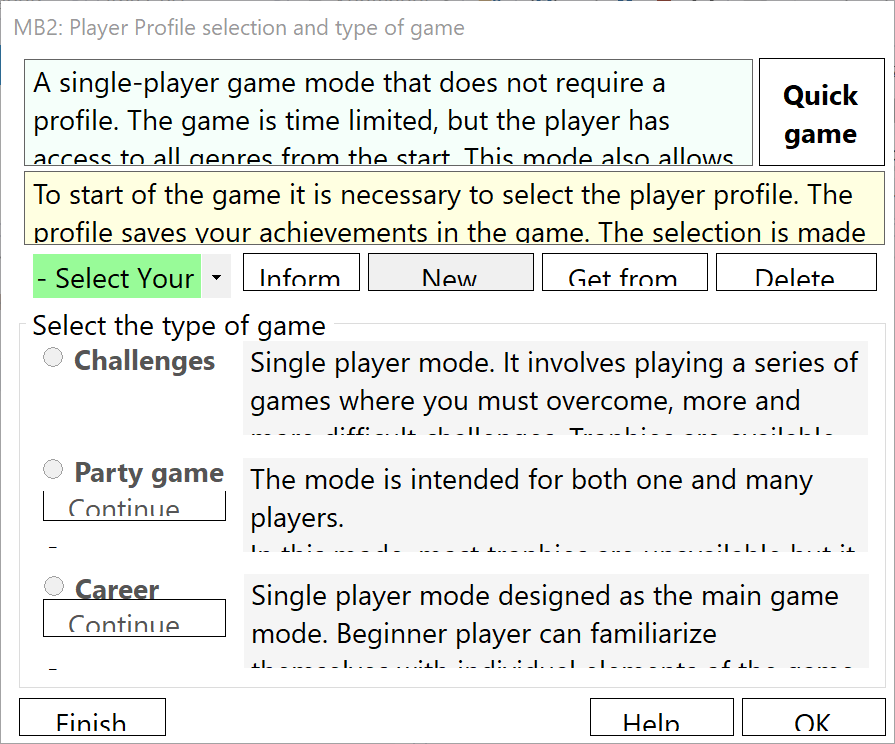 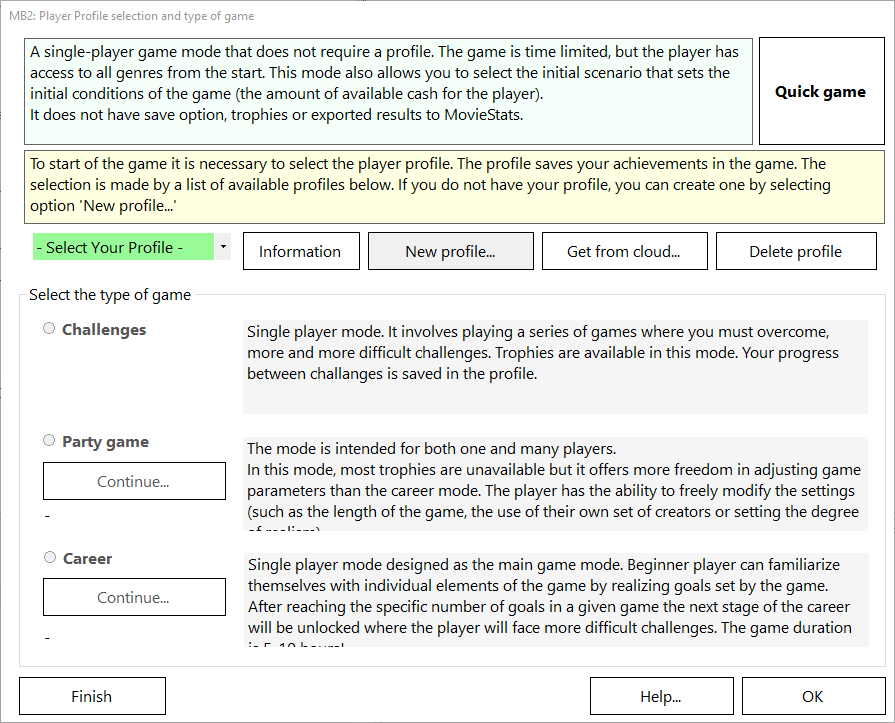 I forgot my password (for my profile and/or MovieStats)

Read this instruction to reset passwords

How to add creators who are not in the game database

Additionally, you can read this text which provides guidance on setting parameters for creators. The text was originally written in Polish but you can use Google translate

Are there any Cheat Codes?

Yes, there are cheat codes available in two versions

If cheat codes are used in a party game, the game blocks the possibility of earning trophies and exporting movies to MovieStats for a given game.

Will there be a Linux version?

Unless the game can be run on Windows emulators of the Wine type (and according to information from players will not give) no additional work on the Linux version is not planned.