Help > The Game -> About Movies

The player with the Assistant, you'll get there a new option: an analysis of the film.

With this option, you will be able to obtain additional information why the production has not met his expectations. It might be too confusing rating or financial flap that at first glance, this should not occur.

This option will be used in three different ways:

What's more, the analysis of the film will be can bring different results depending on the phase of the life cycle of the production. And so will be three phases:

Of course, the most advanced will be in the last phase of the analysis. Film analysis is to first of all explain to you the extreme cases. That is, situations when the film has less than 3 stars, not requested, despite the good ratings or on the contrary, when brought profits despite the fact that the review is not critics did not indicate. So if you have tried to analyze the videos that had good ratings and brought huge profits ... it's probably a little curious you will learn from this analysis;). 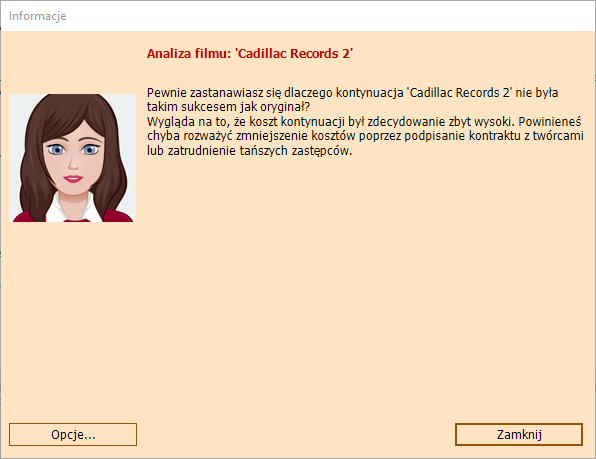 I hope that this option will allow you better read the secrets of the game and understand its mechanics and the relationship between the various elements especially beginners.

Help > The Game -> About Movies