In the real world social systems material affect the creation of reality. From here we can find examples of developers who are willing to work together on a number of productions. These may be directors and operators or integrated type: Director-Actor-Director or a producer/director – another developer. Film business tracks such dependencies that make in the course of the game.

In the game you can distinguish the following types of dependencies.

Relationships or the relationship between the manufacturer and the creators

What are the benefits of relationship

Chemistry and bond-direct relationship between artists

By the chemistry I understand the direct relationship between artists. We can distinguish the two types:

The chemistry between the actors increases when they occur in one film on an equal (or both occurs in a leading role, or both in a supporting role), and will play on >3 *. On the other hand, is reduced when both will play <3 *. (This also applies to the composer and the operator, who shall be treated as if they were obsadzeni in equivalent roles). 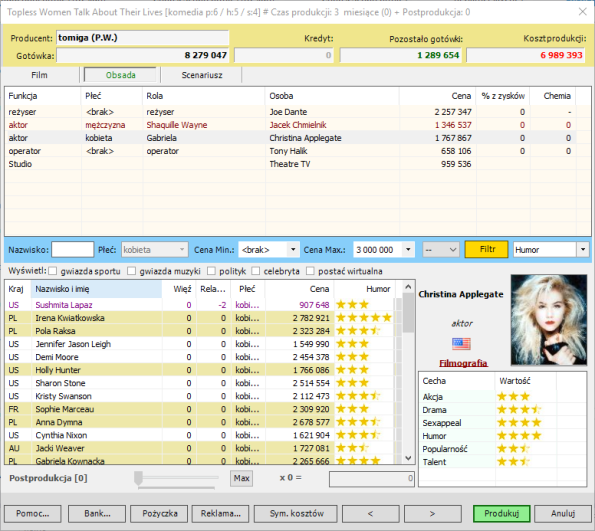 Similarly, in the case of Director bond between him and the creator is growing when they both have more than 3 * and decreases in the case < 3 *.

Every flow relationships and ties

Chemicals can affect the performance of one of the actors. Improve its performance if the chemistry with his partner is positive or decrease when is negative. Of course, the likelihood of this situation depends on the value of Chemistry (the larger-in absolute terms-the greater the likelihood of chemistry – effect positive or negative). Similarly, work on the chemistry of the duo composer/operator. In the case of the Director's relationship has an effect on all members of the team.

Information about the impact of Chemistry/links on the film will be shown in the report.