The game is currently available Scouting, which allows you to search for young talents. When a given character is already on our talent list, the player will be given the option to create a star, and in it several possibilities for its creation. Of course, the creative part may require investment in the form of cash and time for which a given creator will not be available.

From whom it will be possible to make a star

The only professions that can become stars are actor, director, cinematographer or composer. In addition, they may not be involved in any production. What's more, a given creator must be on the talent list (i.e. he was recruited by our scout) or we have a contract with him. As you can see, creating a star is quite an expensive investment.

The following options will be available:

Many creators do not appear under their real name. Most often this is due to its not very media form (difficult to remember). Therefore, the player will have the opportunity to give the creator a new name and surname by which the person will be known from a given moment.

Out of curiosities, if the player leaves his name blank (he does not enter any proposal), the creator will get a new name proposed by the game where the name and surname begins with the same letter.

Sending to a training/course

The player has the opportunity to send a given creator to various trainings / courses that will positively affect the parameters of the creator in a given field and so it can be:

Courses can be of different intensity (for now provides 3 and 6 months). The longer the course, the more the creator's parameter will increase after its completion. During the course, the character will not be available (it will not be possible to use it to produce films). 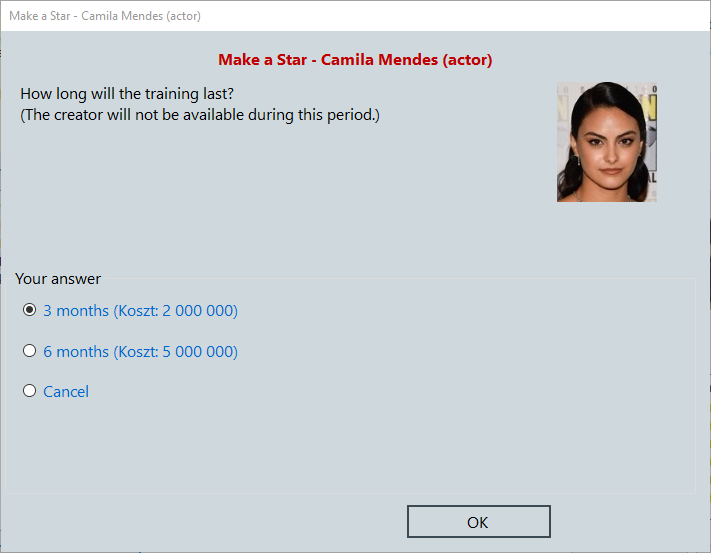 When it comes to the increase in parameters, when the creator starts from a low level, he easily acquires new skills, but after reaching a certain ceiling, developing new skills is more difficult (courses are less effective).

And so sending a creator with a humor parameter of 50 points a 6-month stand-up course increases it to 56 points. However, if he had 75 points, the profit from such a rate will be only 3 points (i.e. ultimately 78).

In addition, after obtaining a certain level (depending on the parameter, it may be 80-90), sending to subsequent trainings will not have further positive effects in the form of increasing the parameter (it will remain unchanged).

The last option that the player can use in creating his star is the ability to change the gender of the creator. Such a transgression lasts 12 months and after its completion, the player can give the creator a new name.

Similar options in addition to talents will be available to creators during their careers, but only if the player has them with them contract. 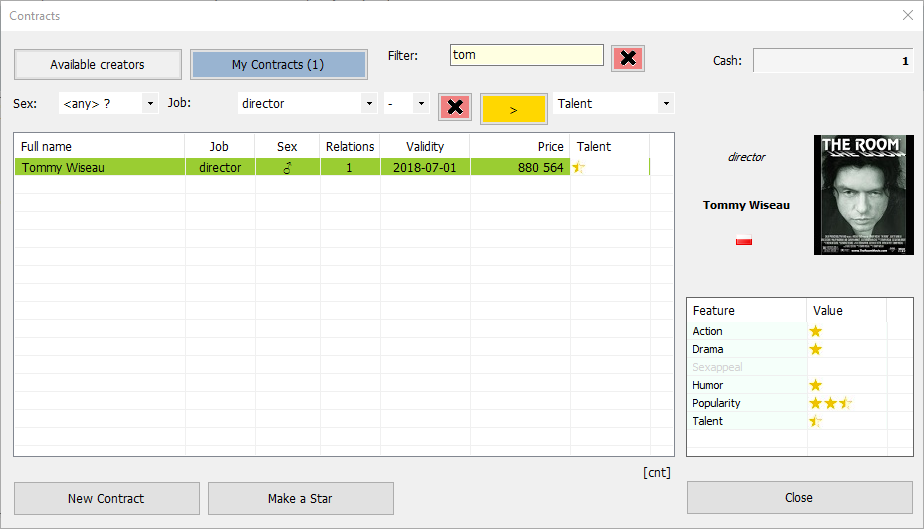 I do not hide that the fun of creating a star is quite a long and expensive process, so you will probably start playing with it at a later stage of the game when you will have a bit more funds but also this was the purpose of this idea to give you some new mechanics to use later in the game when you already have large budgets.

Of course, this is only the first version of this idea and if you like it and have some additional ideas, it may be subject to further changes and modifications.