Today, about one more idea before witcher inspiration. When starting the game, the player does not have enough cash resources to afford all the creators. Therefore, it often has to rely on young creators, fictional characters generated by the game. I have received voices from you that sometimes there are too few such characters. So I decided to introduce an additional option of hiring scouts looking for new talent. 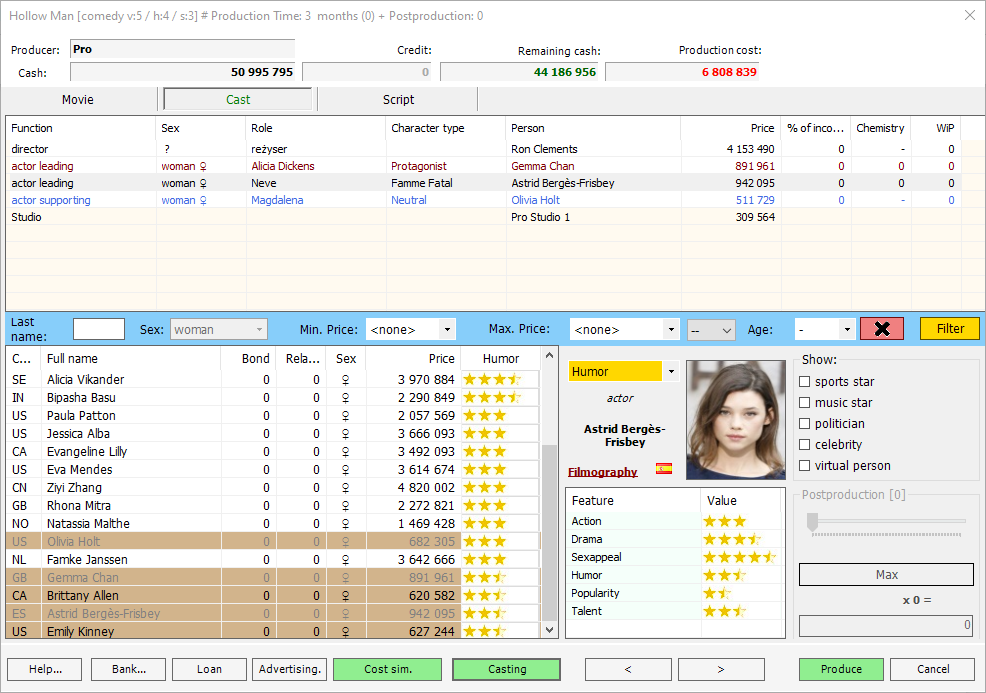 How will it work? Well, having an assistant you will be able to hire a scout. Its task will be to find the creator with a given profile. When we hire a scout, we'll have to give him some information about who he's going to look for.

The creators found by the scout are creators who have not yet started their careers. By default, this is one year from the date the creator began his career, but the highest level of the scout is able to find a person even 3 years before his official start of his career. Among the talents found can be both fictional characters (young creators) and real characters.

This is how the creators found will go to our talent base. We will be able to use them during the production of our film. We can see them by Casting (such a role will be added to the casting results). Of course, we will still have to pay such a creator a salary. However, it will be much smaller, and this is due to the fact that the popularity of such a creator and talent are limited (popularity much and talent partially).

Talents, of course, at a certain time switch to professionalism. This means that they appear in the standard creator list and their parameters are restored to normal values. They then disappear from the player's talent list.

Additional comments. The more specific parameters (specific gender and occupation) we define the greater the chance of the scout finding talent. It is also worth using scouts for ad hoc projects. Please note that the talent found only for a short period will be at our disposal. Therefore, it is worth looking for them for a specific project, because soon they will move on to professionalism.

An additional feature of talent is the fact that they can be used as substitutes for the exchange of casts in events during production. By default, such an exchange can be performed on creators with whom you have contract. From now on, this list will be expanded to include our talents.

And that's all, scouting is not very extensive but I hope that in this form it will solve problems that some players have with finding the right cast for their movie. Of course, any comments regarding this functionality are welcome (especially after the release of the new version of the game when we see how it works in practice).