I mentioned to you recently about the Witcher inspirations. So it's time today to discover the details of what they are about and what they will look like in practice.

The third part of the Witcher is an amazing achievement when it comes to game design. It's about how a world that lives its own life is created, and the consequences of player choices are often visible in a very distant perspective, and it's not just about these key decisions having an impact on the game's plot, but also small things that build immersion.

Inspired by the design of this game, I decided to introduce some mechanics that in the future will allow me to create more advanced elements of the game. And so a concept was created, quite abstract, called "Stuff".

You will be able to find stuff in investments and they consist of the following elements.

A more detailed description of each type of thing:

Here we can review the prizes we have earned. This is the case with statuettes earned at festivals by the producer (i.e. only awards for best film).

The player will be able to make appointments with the creators. Such meetings will be saved in the calendar and a reminder will appear within the specified time limit.

In the game will appear possibility to call celebrities. However, in order to call them, you must first get their number. It is known that most celebrities try to protect their privacy, which is why it is not a simple thing. How will i be able to get a number like this?

Note: the fact that we know the number to a person and try to call it does not mean that the person will always want to answer our phone... Only numbers known to a person (that is, those that were knowingly listed with the player) will be received with priority (although not always ;).

Of course, if a celebrity has our number he/she can also call us with a matter.

In addition to celebrity phones, we can also receive a phone call from NPC. They can result in various events/tasks. You can find a specific example later in the text.

The history of our conversations can be found in billing.

These are various notes and information that we will get during the game. In the form of notes will be saved e.g. are phone numbers.

Various kinds of longer or shorter texts that increase the knowledge of the game or add smaches. And so they can be books (based on the scenarios of iconic films), information leaflets (e.g. about festivals), guides on various aspects of the game, lists, magazines (e.g. editions of magazines with juxtapositions Vanity Fair) etc.

As the name suggests, our search engines are saved in history.

The key decision made by the player, which in the future can be used for various events and/or drawing consequences from these decisions, is sent to the diary.

Some of the items you will be able to buy in investments (this includes publications) some will receive as part of various events/achievements during the game.

These rather abstract concepts do not look particularly revolutionary, but these are concepts that quite significantly affect the possibilities of modeling and interaction in the game world.

It will best illustrate an example of simple functionality. This will be the case of a young screenwriter.

Using the new engine capabilities, it will acquire a bit of blush and look like this.

Everything will start with a phone from an unknown number. The player can now reject such a call (in the end we do not know who and for what purpose is calling) or risk and answer. When we pick up the phone, in this particular case, it turns out that a young screenwriter is calling us with a script he would like to give us. We are informed about the details of this scenario and now the player has several options.

The player can accept such a scenario without complaining, reject it stating that it is useless or ask for changes. The changes may concern specific parameters of the script, cast or ending. 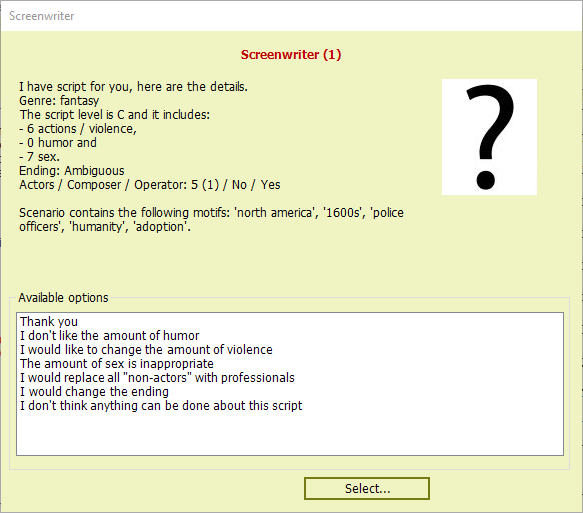 If we decide to make any changes then the screenwriter promises to make it to us and report it in a while. Information about our decision goes to our diary, and when the script is modified, the screenwriter will again respond to us. And again, we can reject, accept or ask for amendments. This process can take several iterations until the scenario receives a shape that pleases us.

This is a very simple example but it is well illustrated by several new mechanics that allow you to build slightly more complicated quests, where on the one hand the player can /must make choices on the other hand the consequences of certain actions will be seen with some delay (the return of the screenwriter in a while).

The 2020 edition is just introducing these new mechanics and not using them too intensively yet. This can be considered as a demo version of engine capabilities. However, it is a great base for further development of the game and the introduction of more complicated relationships between the player's decisions and their consequences.

Of course, I am also counting on your help here regarding ideas for the use of these mechanics as well as new types of quests. If you have writing talents and ideas for interesting stories / quests let me know. Maybe they can be introduced to the game.