To begin with, maybe I will explain where such an idea came from? In addition to diversifying the gameplay a bit and giving it color (literally), I decided to better illustrate the impact of the studio and post-production on special effects. Until now, it was rather based on conventionality (which someone who did not delve too much into the nuances of the game may not have noticed). Now it will be more conspicuous :).

One of the properties of any film is its technological advancement, which is most often manifested through special effects. Depending on the genre and target group of a given production, they are more or less important for the final reception of the film by the audience.

In the Film Business, you can control this parameter in two ways. The first is the choice of a studio that allows you to create more technologically advanced productions. The second is post-production available in the most expensive studios. In the upcoming version of BF2, you will be able to observe the impact of these choices in a visual form. And more specifically, you will be able to choose the effects of post-production with which you will "decorate" your film.

Depending on the type of studio and the advancement of post-production, you will be able to apply various filters that will be applied to the photos of the creators (in all places where they appear).

Of course, the more expensive the studio and the more you spend on post-production, the more advanced filters you will have.

Just choosing specific filters does not affect the behavior in any way, it is simply a visualization of the consequences of previous choices.

As an encouragement, the first screenshot showing the post-production window. 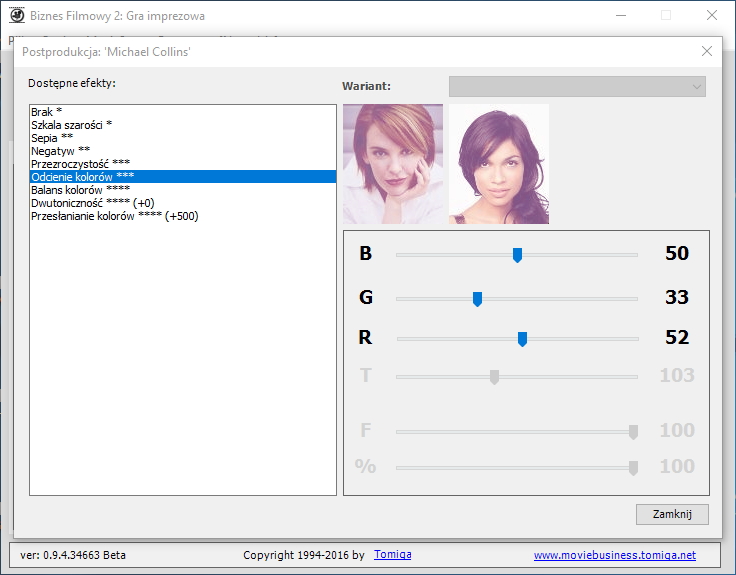