In the current (0.8.7) version of the game, in the production of the new film you will see option “sequel”However, it does not have any significantly on the fate of such production. When I started to wonder how it would look in the final form of an implementation of this functionality I've come to the conclusion that it should behave quite differently than it used to be I thought.

So here is how to look the sequels made from version 0.9.0 Movie Business 2.

The first of my thoughts arose from a discussion with one of the players is the fact that the sequel is not a feature of the film. Thinking about the sequel should begin at the time the scenario. It will have few consequences. First of all a continuation of must be an initiative of the player. Therefore, he will have to create (not buy) scenario and creating a select that is supposed to be the sequel to (of course a particular film on which it is based). 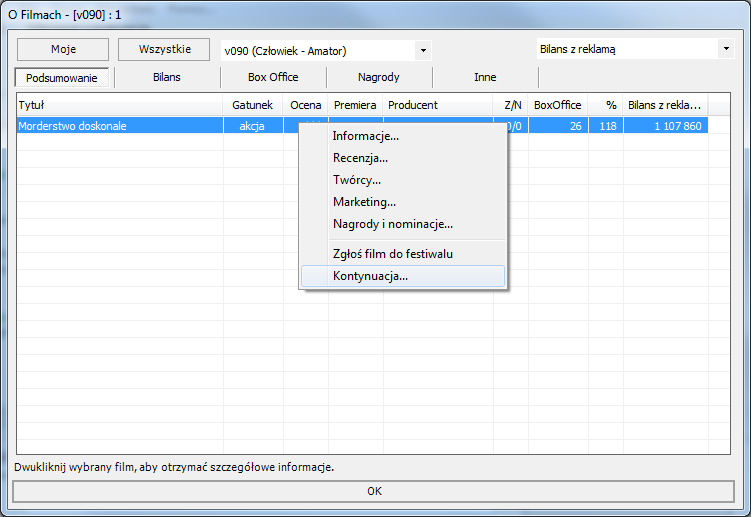 When a player selects, that scenario is to be a follow-up will be required to select the exact type (classic sequel, a spinoff, remake, restart or prequel) and also produced by the film, which is a continuation of want. When you specify the basic information a new scenario, where all the parameters are copied as default (species, humor/violence/sex, ending, as well as the full list of roles). 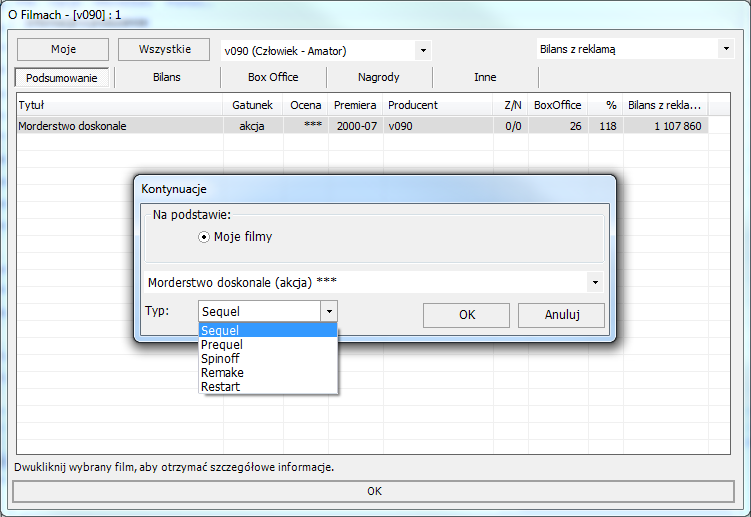 Of course, the player will be able to modify any of these parameters.

One note to the genre. If a player wants to make the continuation of the film, which the species not yet unlocked, will have to change his genre ... which can have serious consequences for the ultimate work.

What will affect the sequels

The fact that the film will be the sequel to in no way affects the quality. Continuation of the increase, however, advertising potential because of the hype that they generate. Player for free nothing gets in addition to more ads without the need to hire popular (expensive) developers. This is also in line with reality, where in most cases the sequels are based on the popularity of the original but for example. There are already less popular actors compared with those in the original.

This means that the player does not get free any tangible benefits and only database of fans of the original production. Whether fans will choose movie depends on the manufacturer (how much will advertise new production). The manufacturer, in turn, will receive a larger base of fans that can reach with your ad.

Here are the types of sequels, which you can produce in the game and their meanings:

Selecting a specific type will have of course consequences about which you will read later in this text.

When we have finished the sequel scenario we can go to produce the proper movie. At this point, the actors will be automatically ordered to the roles that odtwarzali in the original. There are, however, two derogations to this rule. When the actor is not available and if the creator will not be interested in making the continuation.

Better actors and directors may not want to participate in this project (especially where the original came out poorly). In the case of some directors can they claim more freedom to want to agree to work on the sequel.

Of course, if we want to recruit the creator at the original it will ask for a higher fee than normal. This is, however, justified because whether viewers will want to see the sequel also depends on the cast that is, whether they will see a familiar heroes and alumni on their roles.

Sequels and advertising, audience and festivals

Creating a sequel, and later the forgiveness of his ads does not make sense ... Hence the integral action after shooting the sequel must be adequate advertising campaign, which is to reach as many of the original audience. As the entry point is assumed to be the popularity of the original that is, the entire audience, which potentially would be interested in seeing some kind of sequel. Then take into account a review score of the movie (the better the more people waiting for the continuation and vice versa – If someone has failed on the original may not necessarily be interested in further fate of Heroes).

How big the hype will have a continuation of (that is, how much of the original audience visits the cinema to see the sequel) depends on its type. And so:

The jury of festivals are reluctant to grant the prize kontynuacjom. This is due to the fact that the jury is usually looking for fresh and new in the movies, and not having to take the known schemas.

As you can see the logic which stand behind sequels is quite complicated… but I hope this makes twice thought if you really want to shoot the continuation and, if so what kind. If you have any additional questions or comments feel free to discuss it in a special thread on the game's forum.